Four years ago, The Clowes Pavilion Reimagined co-curators Annette Schlagenhauff, PhD, Curator of European Art and Kjell M. Wangensteen, PhD, Associate Curator of European Art, were tasked with reinstalling the Clowes Collection in a way that connects with our museum guests. They began by arranging unexpected but meaningful pairings using a three-dimensional model of the pavilion. Ultimately, they chose 90 works from the Clowes Collection and paired them beside art from other areas in the Indianapolis Museum of Art’s permanent collection to encourage guests to draw connections across cultures, times, and places. Read on for more about their curatorial approach, and a deeper dive into this exciting reinstallation.

In the 2006 movie Night at the Museum, the main character played by Ben Stiller takes a job as a security guard at the American Museum of Natural History in New York, where the exhibits come to life each night. In the same way, I often wonder what works of art at the IMA would say to one another if they could talk. Would objects from diverse times and places be able to bridge their differences and communicate? What things might they have in common?

Our newly opened reinstallation of the Clowes Pavilion experiments with this idea, prompting guests to ask similar questions of the works of art on view. European paintings from the Clowes Collection have been placed in “conversation” with objects from other parts of the permanent collection. At the northeast entrance to the Pavilion, guests will encounter a striking example: here, Paolo Uccello’s fifteenth century portrait of a young man hangs next to Andy Warhol’s silkscreen portrait of the fashion designer and Indiana native Stephen Sprouse. 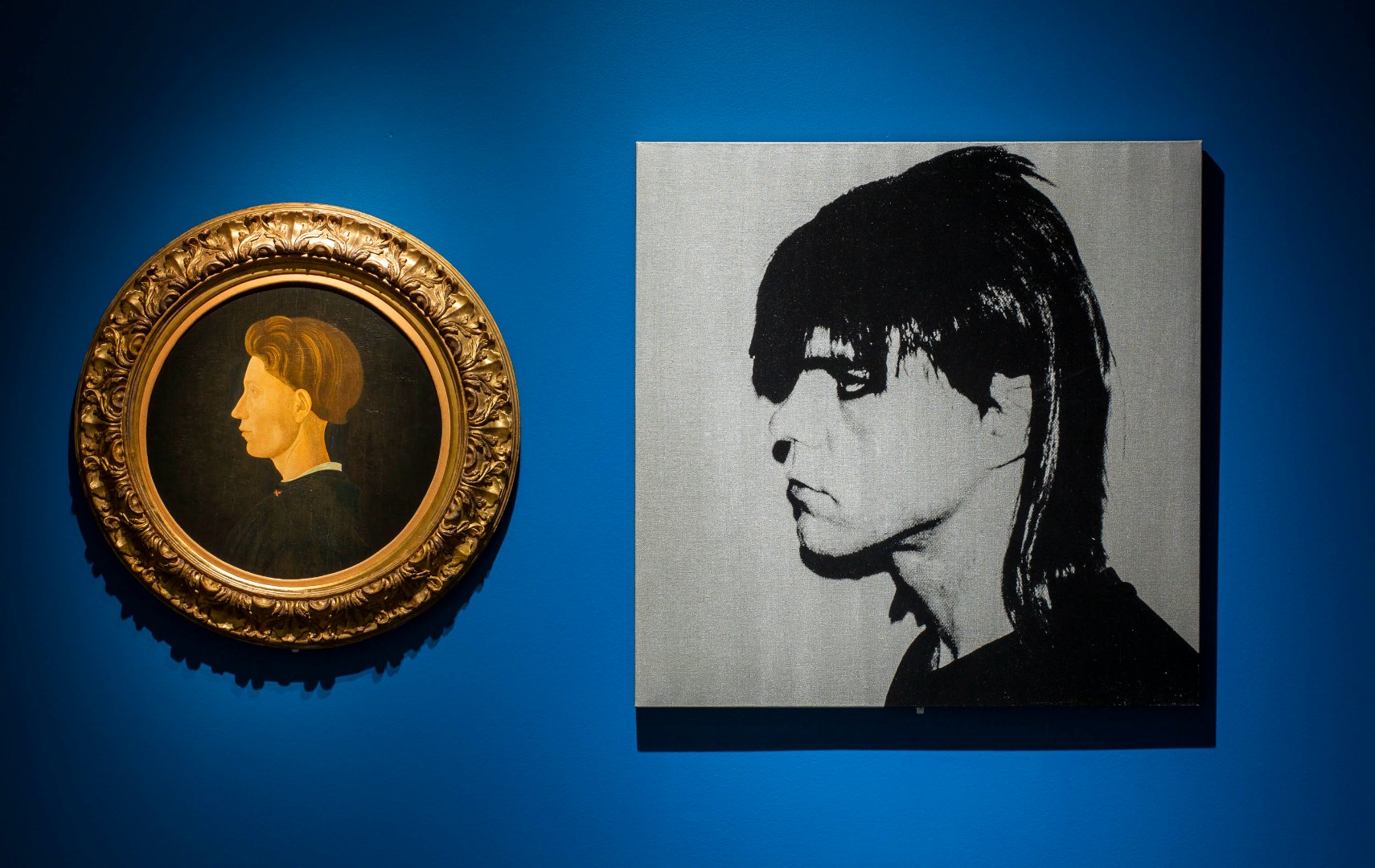 Despite their obvious disparities, both are sensitive portraits of young men shown from the left side. Moreover, they share a common antecedent: the profile pose of the man in the painting at left is characteristic of fifteenth-century Renaissance portraits, which were often modeled after ancient Roman coins and monuments. Throughout Western history, artists have referenced antiquity to evoke the prestige and glory of ancient Rome. Likewise, Warhol’s portrait slyly alludes to this grand pictorial tradition while also conveying a sense of Sprouse’s irreverent, punk-influenced aesthetic.

Another of the new and exciting galleries in the renovated and reinstalled Clowes Pavilion is a thematic gallery that we’ve called “The Influence of Women.” In the largest of all the galleries within the Clowes Pavilion—previously known as “the Music Room”—seven paintings in the Clowes Collection, by European painters from Italy, France, and England, form the core of an installation highlighting the roles and status of women in society explored through the lens of art.

This collection is very rich in paintings by Italian Renaissance painters who devoted themselves to depicting the Madonna and Child, a significant subject in Western art that features a woman of influence. For example, Madonna and Child with St. John the Baptist by Giovanni Bellini and Workshop (2000.341), dating to about 1490-1500, is a superb example of the Madonna’s centrality in the Christian tradition, evoking profound religious emotions, alongside feelings of compassion and tenderness linked to her role as mother. We asked ourselves, as curators, could this topic of Madonna/mother pan out as a broader installation theme? 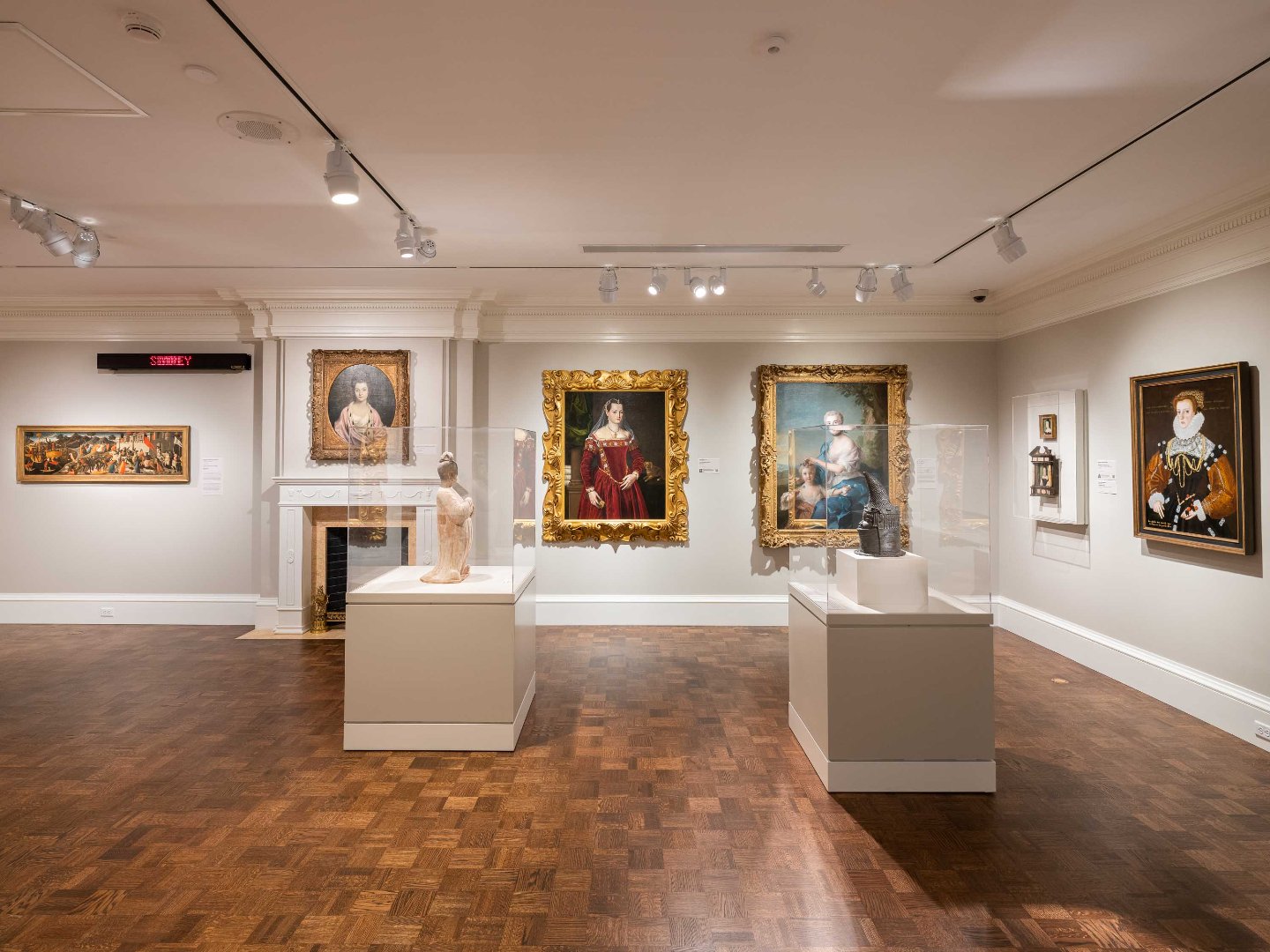 The Clowes Collection also features several portraits of women who held positions of high social standing in their own day and time. In the center of the image above, a large-scale portrait by a painter in the circle of Agnolo Bronzino, Portrait of a Lady (2016.162), dating to about 1540-1550, is illuminating. Despite the fact that her exact identity has been lost to history, her elaborate attire and hairstyle pinpoint her as a member of the Florentine court of Eleonora di Toledo, herself a powerful, influential ruler. These two strands—images of the Madonnas and women of noble, or regal, stature—became the starting point to build on. Artworks from the Clowes Collection were then selectively augmented with artworks by American, Asian, African, Mexican, and contemporary artists from the IMA’s permanent collection.

Artworks by women artists were also essential to our ever-expanding concept for this gallery. From the Renaissance until today, women faced, and often continue to face, hurdles for entry into the art world. A particularly strong “conversation” between artworks, separated in their creation dates by over 500 years, emerged to reveal that artworks by, or about women, can also resound with provocative intent. Displayed next to each other in this gallery (to the left of the fireplace in the images above), you will find a painted side of a fifteenth century Florentine cassone, or wedding chest, painted by Domenico di Michelino with a panoramic scene showing The Battle of Theseus and the Amazons (62.164) and Jenny Holzer’s moving electronic signboard from her series Untitled (Selections from Truisms), 1983 (1993.66). Each explores the roles of men and women in the societies of their time. I’ll refrain from saying anything more here, and I encourage you to come and see The Clowes Pavilion Reimagined for yourselves to discover more! And when you do, check out several videos we commissioned from historians and art historians who highlight three of the influential women in this gallery. And there’s also a card activity table where you might want to tell us about an influential woman in your own life!

EXHIBITION CREDITS:
The Clowes Pavilion Reimagined is made possible with support from Allen Whitehill Clowes Charitable Foundation and The Clowes Fund.